The reality is, the high schools are not balanced. To offset this, Fishers has allowed parents to choose to send their kid to the high school outside of their area within the district. The result of this is that about 8 kids have chosen to go to HSE instead of FHS, and almost 200 have chosen to go to FHS instead of HSE. This doesn’t include the additional kids going to FHS for the IB program.

The net results of this for 2019-20 can be seen in the following chart pulled from the HSE School Board BoardDocs page: 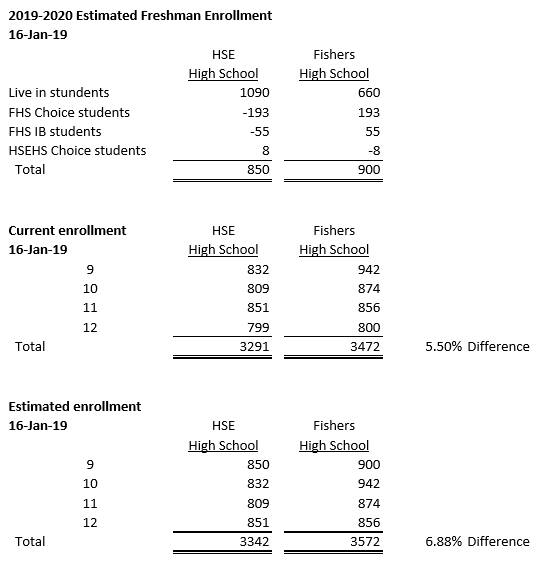 You an see that in the end, HSE is currently expecting 3342 students next year with FHS having almost 7% more at 3572. While Fishers High School is higher, the district expects growth to be on the HSE side of town, thus the lower number could change.

Where the Noise is

The issue with high school choice, however, centers on transportation. The HSE district has offered transportation for many of the high school students even if they were not in the current district lines. This was not something guaranteed, so going forward transportation will not be offered. This has caused a number of people to complain. One of the biggest issues is that many people going to HSE have to drive by FHS to get there. Another issue centers on the neighborhoods near the dividing line. In those neighborhoods, there are a number of kids that have chosen to flip schools. This puts pressure on the remaining kids that are friends to do the same so they can stick together. For those families that can’t afford or have the means to drive their child to school, this adds undo pressure. Additionally, because neighborhoods are on the line, in some cases, busses from both high schools enter the neighborhood, yet kids can only use the one for the school they are allocated.

The issue has been contentious. At the last school board meeting, there was a great deal of discussion on the topic by the new school board. Additionally, one parent spoke on the topic to the board. The following is the rough video of that meeting:

Based on the comments made in the last HSE School Board meeting, redistricting at the high school level is not currently planned. The choice program, while not at the percentage the superintendent would like, is close enough to let things continue as they currently stand. The plan is to continue the experiment of choice for the next year or two.

The school district is currently working on student numbers for next year now. These numbers need to be nailed down because it determines the number of classrooms and teachers needed. If there is a need to shift teachers or hire new teachers, that needs to be done sooner rather than later. As such, any changes to district school lines need to be finalized now.

Question: Could buses be offered for those neighborhoods that have a busload of kids that are choosing to go to a different school?

Answer: This would cause issues. There could be others that then want to switch schools who hadn’t done choice due to the lack of transportation. Additionally, other kids could say it is unfair to bus some kids but not all.

Question: Could we extend the bussing done this year for another year?

Answer: The reasoning for adding bussing this year no longer exists next year. Additionally, bussing was never guaranteed. Kids were allowed on busses if there was space.

Question: If IB kids are being transferred between schools on the shuttles, why couldn’t we expand this to allow any kids to use the transfer buses? This might take 2 or 3 more buses

Answer: If a kid can afford to drive, they are likely to drive rather than bus to one school and then take another bus to school.

Answer: Because kids at Riverside Junior High want to stick together as do those at some of the other High Schools. Additionally, Fishers High School is closer to where a lot of kids live.