Poverty is real. Poverty, however, doesn’t impact most people, but for those it does cross paths with, life is tough. One of the questions that most people can’t answer is, what is the level of poverty where you live?

I am fortunate to be able to live in a nice suburb of Indianapolis where you don’t see (or at least notice) homeless people nor is it clear that there are people living in actual poverty. In my area here aren’t people panhandling, nor are there people sleeping on the sidewalks. That is generally what you’d find in the bigger city of Indianapolis.

The reason you don’t see it is because the poverty rate in Fishers was a mere 1.8% in 2013 as compared to the state level of 9.5%. It is important to note, however, that 4.3% of children are in poverty in Fishers, versus the state level of 21.8%.
As a comparison, the poverty level in Indianapolis is 11.9%, which is above the state average as most would expect; however, it might not be as far above as many people would guess. The number of people with income below the 50% poverty level is 5.8%. Unfortunately 30.6% of children are below the poverty level. Of the families in poverty, 61.4% are ran by a female with no husband. Only 23.4% are families ran by a married couple.

When it comes to poor families in Danville most (72.4%) are a females running a house with no husband present. Another 18% are families with a married-couple leading the household. 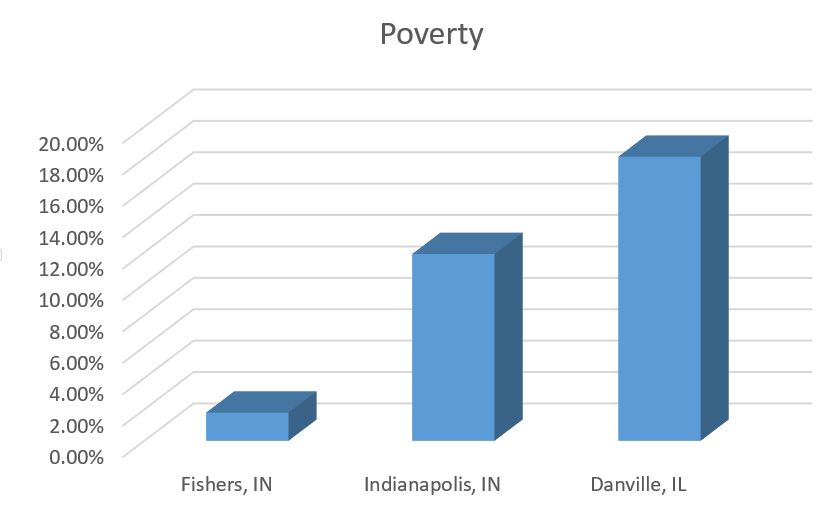 I’m blessed to be able to live in a city like Fishers. While the poverty level is small, it is not non-existent.
The percentages reported are based on a poverty income level. The average family needs a lot more to live on than is provided by the minimum poverty levels. While the numbers in Fishers are low, they are definitely not to be ignored – especially as the city grows. There are a number of the over 28 food pantries in Hamilton County that are in or around Fishers. These pantries will tell you that while the statistics might sound low, a few percent of 80,000+ people equates to thousands in need.

In Indianapolis, the number of people in need is greater than 100,000. In Danville, Illinois it is over around 10,000. When you start adding all the towns together, the number of people in need gets daunting. Having said that, helping the local food pantries, missions, and other organizations can go a long way to help keep these numbers in check or to even help reduce them. I’m on the board for the rescue mission in Danville. The day they are no longer needed will be a great day. In the meantime, we will do what we can to help.

My numbers come from city-data.com. You can find the numbers for your city at the site as well as find additional details and break-downs for the three I’ve mentioned.

Today at the church I attend, the sermon included a discussion on Bloomington, Indiana. It was stated that Bloomington is the most impacted city in Indiana when it comes to poverty. This surprised me. I would have guessed Gary or some of the other more industrial areas of the state. While Gary’s rate is high, Bloomington’s is definitely higher at 29.6%. That’s almost one in 3, versus Gary’s 25.8%, or roughly 1 in 4.

One thought on “Poverty in Fishers, Indiana”